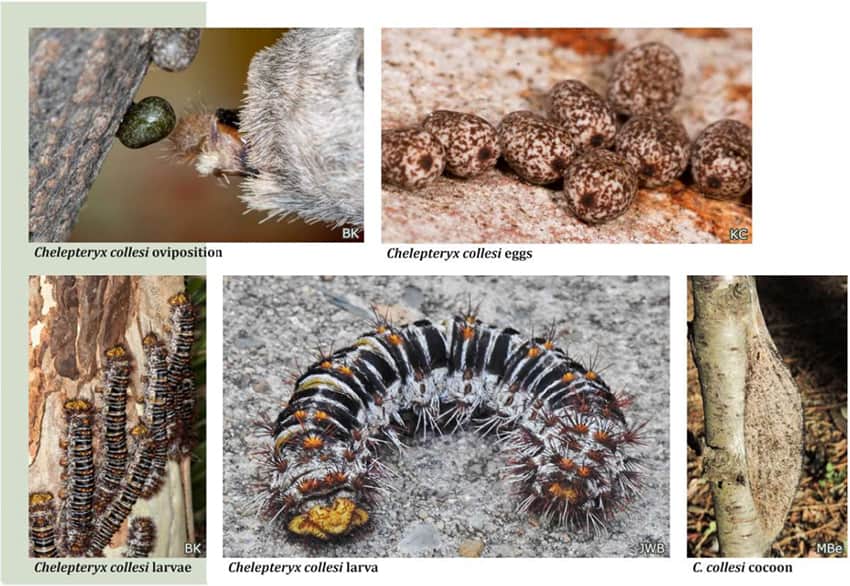 Chelepteryx collesi (White-stemmed Gum Moth) is often seen in Canberra suburbia in most of its developmental stages – larvae, cocoon and adult. The female moths are very large and have been described as “bat-like” when flying around a light.

The adults emerge in late April and early May. Like many insects, they can be obvious in some years, but hard to find at all in others. On one Anzac Day evening, Glenn saw gatherings of C. collesi at many of the street lights of lower Flynn.

The caterpillars feed on the leaves of eucalypts, including the common E. mannifera (Brittle Gum), during spring to mid summer. The fearsomely spiny black and white banded mature larvae are around 12cm long, and are conspicuous when wandering the footpaths in January looking for a sheltered place to build a cocoon. They like positions a metre or two above the ground, such as letter boxes, under eaves, and nooks on tree trunks or wooden fences. On completion of the cocoon, the larva works its spines through the silk to help protect the cocoon. The numerous larval spines can easily pierce human skin and cause skin irritation and in rare cases anaphylactic shock, so larvae and cocoons should not be handled. The similar C. chalepteryx, not illustrated is common on the south coast.